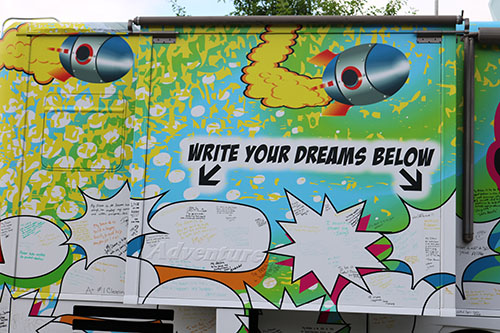 Recently, I was walking my dog around the neighborhood when I noticed a large, colorful RV parked at the high school. The vehicle was named “Charlie Rocket’s Dream Machine.” I took a closer look and noticed that people of all ages had taken the time to write messages describing their hopes and dreams. The vehicle was covered with statements that were sweet, inspirational, meaningful and endearing. 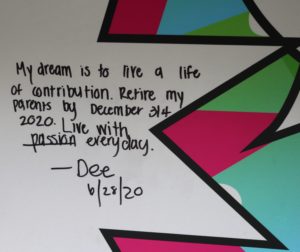 I thought to myself, who is Charlie Rocket? That’s when I noticed a black Mercedes with dark-tinted windows parked directly behind the RV.

I couldn’t see inside the car so I knocked on the window. The driver gave me an unfriendly look as he rolled down the window. I was unfazed by the man’s expression. I asked him, “Do you know Charlie Rocket?” A young man in the passenger’s seat smiled at me, held up his hand and said, “That’s me!” 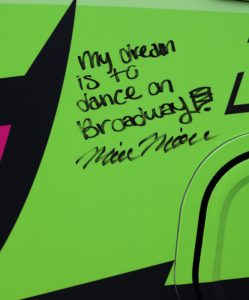 I told him how inspired I was by all of the messages of hope I had read on his RV. I asked him, “What made you decide to do this?”

Charlie stepped out of the vehicle and told me his story.

Charlie wanted to be a high school athlete more than anything, but he believed he was too overweight to participate.  Instead, he would focus his energy on another goal. He would become a famous CEO.

After graduating high school, Charlie realized college was not a good fit, so he decided to leave and try his hand in the Atlanta music scene. While success was not immediate – he was fired twice! – Charlie refused to give up on his dream. In 2010 he formed a music management company, Street Execs, and signed multiple hip-hop artists, which eventually brought him the fame and fortune he craved.

During this same period of time, Charlie’s weight continued to yo-yo back and forth. He found himself binge-eating at night. At his heaviest, he tipped the scales at 305 pounds. Even more concerning than the weight gain: a long dormant childhood brain tumor had begun to grow.

One day, the fast food restaurant employee he saw most days told him: “You’ve got to stop coming here.” Charlie was shocked. Afterall, who turns away a regular customer? It was a wake-up call. Time to make a change. 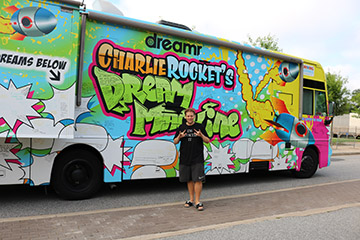 Charlie realized that money meant nothing without his health, so he gave up his multi-million-dollar business, changed his diet and moved to California. Once there, he was challenged by a friend to become a marathon runner, which he did. In 2017, Charlie made a contract to himself. In that contract he listed goals he hoped to reach including his lifelong goal of becoming a world-class athlete. Not only did Charlie make the commitment to himself. He told his friends and family about his goals too. He would look at his contract to himself daily.

“When I made the shift from dreaming big to believing big everything changed.” – Charlie “Rocket” Jabaley

Charlie ran several marathons and completed an ironman triathlon competition. He realized his story might inspire others too, so he decided to ride a bicycle from Los Angeles to New York. He called it the Dream Machine Tour.

Charlie’s inspiring story has touched lives throughout the country and around the world. He has been on national and local news programs. He has appeared on magazine covers and was featured in a Nike national ad campaign too.

Charlie’s goal has always been to make a change in the world. Today, he hopes to inspire 1 million people. He’s taken his show on the road and is driving his colorful RV across America to give people hope and inspiration along the way. He believes his story isn’t over yet, and your story shouldn’t be over yet either. He said instead of dreaming about what you want, write it down. Tell others. Be personally accountable so you can make it happen.