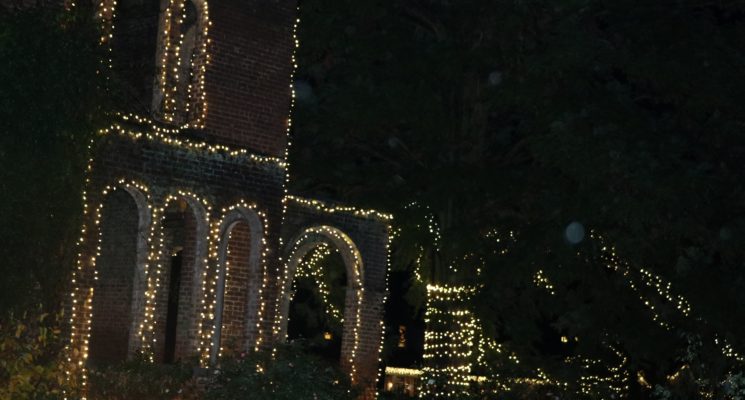 The Haunted Ruins of Barnsley Gardens 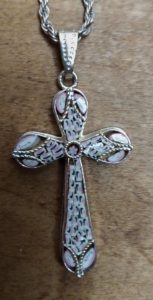 Recently, I was gifted with an overnight stay at the Barnsley Gardens Resort in Adairsville, Georgia. I did no research prior to my stay, so I was unaware of its haunted history. However, I did wear a rose cross I purchased at the Vatican in Rome, Italy, and brought my Tibetan bells, just in case.

Despite the cold, rainy weather, my husband and I decided to venture out of our warm hotel room at the resort to explore the nearby Barnsley Ruins, which were decorated with holiday lights for the Christmas season.

Rarely do I get the “heebie-jeebies” when visiting a historic place. However, I can honestly say the Barnsley Ruins spooked me.

Was That a Ghost?

Did I see ghosts? Absolutely. I saw glimpses of them walking between the main house and the kitchen and the old China Fir tree, which was as old as the house. Did I hear words spoken? I did. Although what I heard was more of a whisper. Did I experience a range of feelings in this place? I felt joy, sadness, a little fear and nausea. Sadness and some fear in the ruins of the house as well as a feeling of dismay concerning the new additions around it. I felt joy in the boxwood garden, which was beautiful. The nausea dissipated after I left, thank goodness.

A Tale of Love, Destruction, Murder and Ruin

In the 1840s, Godfrey Barnsley, an Englishman and cotton baron, bought 4,000 acres to build an Italian villa for his beloved wife, Julia, a shipping heiress from Savannah, Georgia.  Prior to construction of “The Woodlands,” Godfrey befriended an old Cherokee man and told him of his plans to build a 24-room mansion. Godfrey was told by the Cherokee not to do it as the land was considered sacred. The Cherokee man’s advice was ignored. 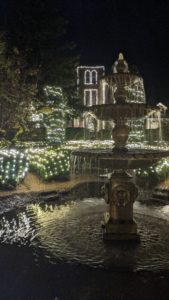 During the building’s construction, Julia died. Heartbroken, Godfrey suspended construction of the home only to be visited at the fountain by his now deceased wife Julia, who encouraged him to continue building the house for himself and their children. 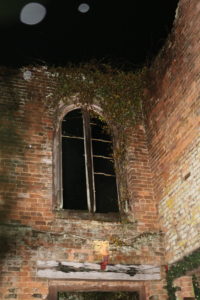 The house was completed in 1848 and remained undisturbed until the Civil War. During the Civil War, 29,000 Union troops reportedly camped out on the land. A friend, Col. Richard Earle, tried to warn Barnsley of the approaching army; he was shot and killed outside the door by a Union sharpshooter. After the Union Army set up camp, Union General James McPherson saw how beautiful the property was and wanted it to be spared and protected during General Sherman’s destructive March to the Sea.

That was not to be.

After McPherson left, the house was NOT burned to the ground; however, Union troops ransacked the home and removed $150,000 worth of items, leaving little of value behind. Godfrey’s daughter Julia reportedly took the people that lived at the Woodlands to the woods where she showed them how to dig out roots and other edibles to eat and survive. Supposedly Julia was the inspiration for the character Scarlett O’Hara from Gone with the Wind.

The story doesn’t end there. In 1906, a tornado blew the roof off of the house, and in 1935, Godfrey’s great grandsons, Preston and Harry, argued over control of the property. Preston chased Harry through the house and shot him, and Harry died in his mother’s arms. In 1942, the property was auctioned off to people outside of the family, and today it’s a resort.

Residual Energy versus a Ghostly Presence

“Most buildings will contain some kind of residual energy. Empaths pick up on these vibes rather like first impressions.”  “The energy of a spirit is often recognized when you feel a presence, or denser energy, at the same time as a dramatic temperature drop.” – CrystalWind

I think the ruins at Barnsley Gardens Resort are a combination of a ghostly presence and residual energy. I believe the place is occupied by residents from its past that continue to roam the house and grounds, but I believe that the old building holds residual energy too.

Psychometry and the Energy in Things

One of the tools I use as a psychic is psychometry, which refers to the ability to feel energy in a physical object. I may hold a ring or a watch to gain a better understanding of a client I’ve just met, or I may be able to interpret information about someone from the past who owned the object. I also use the skill to go antique hunting.

Everyone leaves a little bit of energy behind, particularly in items that are cherished. 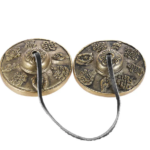 After visiting Barnsley Gardens Resort, I needed to clear the energy from myself, my husband and my car. I clear energy in a number of ways, but the two techniques I use most are burning sage in a shell while using a feather to distribute the smoke around me and the area, or I use Tibetan Meditation Tingsha Cymbal Bells.

Clearing energy from a space or from things is always a good idea. You should consider cleansing gemstones and crystals after purchasing them (overnight salt soak and placed in moonlight), clearing a space after you’ve had an argument, anxious dreams, after readings or communicating with ancestors. Other ways to clear energy include the use of water, music, salt, smoke, chanting, essential oils, fire, wind chimes, earth and centering through breathwork.