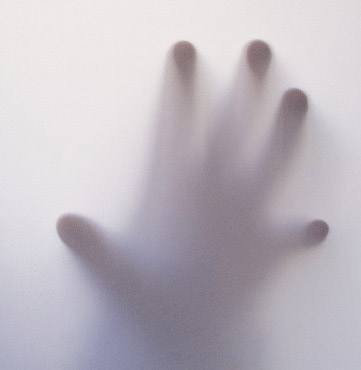 Ghosts in the Antique Store

Two weeks ago, a friend invited me to visit her in North Georgia. She wanted me to take a tour of the store where she and other vendors sell handmade crafts and antiques.

The two-story, brick and wood-frame store was constructed more than 100 years ago along the town square. Over time, a couple of fires gutted portions of the building, and the store was rebuilt. The only original section remaining was an elevator shaft in the middle, which was used to store empty boxes.

The store was also haunted.

In fact, my friend, other vendors, and the store owner have experienced quite a bit of paranormal activity at the store. Flying Christmas trees, flickering lights, shifting booth displays and whispered words are just a few of the experiences relayed to me by my friend.

The first stop on my personal tour was the elevator shaft. From what I could determine, several male entities hung out there and requested through me that the employees “clean up the place,” because boxes were stacked up haphazardly, which created a bit of a mess. If ghosts live in a hierarchy, those ghostly guys would be considered the head honchos. They seemed happy enough to be there and clearly liked the place. I believe they were people that worked there many years ago. 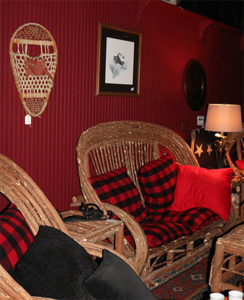 As I moved through the store, I “saw” an old couple sitting side by side in a wicker love seat. Even after death, they appeared to be completely in love, which made their presence even more special to me. They didn’t die at the store, and the seat was a new, handcrafted piece. The couple just seemed to like it and were comfortable there. 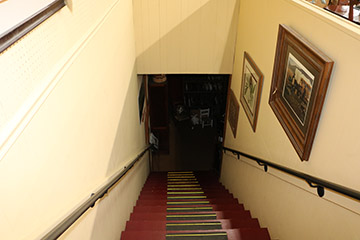 Sometimes a ghost may not have a direct connection to a building but will choose to inhabit it because old buildings are re-purposed and reused rather than torn down. In other words, the building is steeped in history. That was the case for the two gentlemen I spotted on the stairs. One of the men was standing at the top of the stairs. He indicated to me he had been killed in a gun fight. The other was standing at the bottom of the staircase. He did not indicate why he was there but appeared to be looking up towards the other gentleman at the top of the staircase. I hope that my presence brought them some peace. 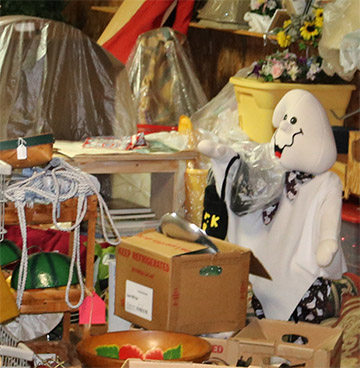 The attic was covered with everything imaginable. It was here that I felt fear. It wasn’t my fear, it was the fear of two ghosts – a man and a young girl – who remained somewhat hidden among the boxes. I realized they were very likely runaway slaves from the 1800’s. They did not know it was 2019. I told them it was OK now, they were safe, and no harm would come to them. I felt their relief. Then I heard the man laugh and looked over into the general area where he seemed to be looking. I laughed too when I spotted a soft sculpture of Casper the Friendly Ghost.

Sometimes antiques retain the energy of the original owner. This isn’t necessarily a ghost, rather an energy presence or energy signature that may bring paranormal activity with it upon purchase.

That’s because antiques have a history, says Amanda Linette Meder. History could include:

I buy specific antiques because they speak to me. Before making a purchase, I will touch an antique to see if it is “real” or a cleverly made copy. I believe when an antique has an energy presence around it, it’s more important than ever to treat the antique with respect and care.

As I walked by the antique stalls, I was drawn to a dusty corner where I saw a canteen from WWII. Over and over I heard in my head, “Never Forget.” I told my friend the man who owned the canteen had died in WWII and remained attached to it. I thought to myself, why do the words sound so familiar? Today I found a quote by Dwight D. Eisenhower referencing the Nazi death camps he saw at the end of WWII.

“The world must know what happened, and Never Forget.” – Dwight D. Eisenhower

Another lighted display case held a double string of pearls. There was a clear energy presence attached to the beautiful strands. An elderly widow had once loved those pearls and left behind an energy “signature” to make certain they remained safe. I told my friend it was very, very important to appreciate the pearls and treat them with care and not to let children play with them. The lady seemed adamant about not letting children play with the pearls.

The resident ghosts seemed to enjoy the Christmas room the most. I kept hearing words in my head: “We love the Christmas room. It’s so much fun!” I let my friend know that whatever the owner decided to do with the space, she should consider keeping the Christmas room intact. Apparently, the ghosts enjoyed moving the decorations around. 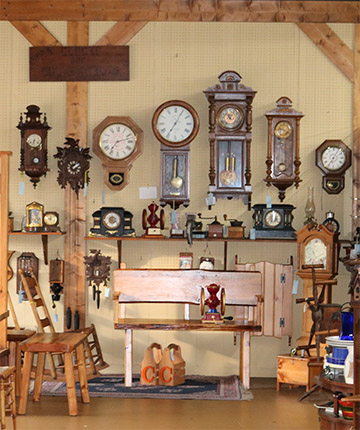 Clocks Chime out of Time

On one wall of the store, there were chiming clocks of all kinds. As we walked by, or if we were on the other side of that floor of the store, several clocks would chime, letting us know there was an entity by the clocks. The ghost that stayed in that area let me know he enjoyed caring for the clocks and was detailed in life as well. Perhaps he was an engineer?

So what do you do after purchasing an antique? Clean it, and if possible, and use salt as a way to absorb the energy that may be clinging to it. For more on the topic check out this link: http://www.energy-shifter.com/cleansing-antique-or-used-objects.html. I recall a situation years ago involving another friend. She brought a small set of dried bones on a leather string back from her international travels and hung the bones on a cabinet in her hallway. I asked, “What did you bring home?! Please put them in salt water, and let them dry in the sun. These bones have something attached to them.” She did so, and the unusual paranormal activity in her hallway settled down.

All in all, we counted 21 ghosts in that store and 6 energy signatures. I spoke with my friend yesterday, and she said the ghosts seem to be calmer now. It is my hope that acknowledging their presence in a kind way helped dissipate some of the pent-up energy. I let them know they were welcomed to stay or they could go on to the light.

Share
Psychic Fun: Determining Whether an Antique is Real or a Replica

So how can you tell if an antique is real or not? By letting it speak to you. Do some deep breathing and enter a calm state of mind. Walk into the store and look around and listen. This will allow the real antiques to “shine with their own special light.” When that happens, I will walk over to the antique and lightly touch it with my hand. By doing so, I can feel a slight vibration indicating the antique is worth considering further. If you are still unsure, consider these tips on antiques from the DIY Network: https://www.diynetwork.com/how-to/make-and-decorate/decorating/tips-on-distinguishing-a-true-antique-from-a-reproduction.

What To Do When Life Throws a Curve Ball … or Two

Fire in the Sky!